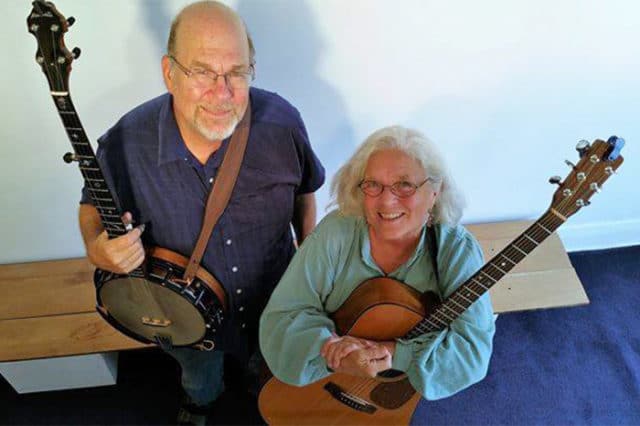 Sherry Minnick and Phil Nusbaum have a fresh approach for a duet with as much experience as the two of them. They of course sing and play the gems of Classic Country and traditional Bluegrass. But this duet is Sherry’s vehicle for “American Songbook” songs you hardly hear in the acoustic format, songs that her family sang on car trips when she was a kid. You might find yourself singing along to songs like “When the Red-Red Robin Goes Bob-Bob-Bobbin’ Along.”

There are also original sides to Sherry and Phil. Sherry writes songs that are modernistic-leaning as far as musical style. Her songs have been recorded by the likes of Stony Lonesome. Phil Writes banjo music. His tunes fill the niche between classic Earl Scruggs tunes and progressive acoustic music, and has been reviewed favorably. He’s played them with groups such as Urban Renewal and the Blue Drifters, and has a group of new ones to share. And, Phil is a noted for turning all kinds of music into bluegrass banjo-based music. The combination of songtypes carries listeners along.

Sherry and Phil are both great communicators about their music. Sherry is a former KFAI-FM (Minneapolis) radio host, and Phil has presented Bluegrass Saturday Morning over KBEM-FM (Minneapolis) for decades. They enjoy providing spontaneous background to the songs they present and having fun with each other and audience members. And of course, having fun is what it is about.